When Patricia Unger was 28 years old, she received a fibroid diagnosis. Right away, she was worried. About symptoms like heavy bleeding and abdominal pressure, but also about whether she would ever be able to have a family with her husband, Jeff.

In spite of her fears, Unger’s doctors told her to just try and get pregnant. Then, once she’d had children, they would “cure” her fibroid symptoms with a hysterectomy—the surgical removal of her uterus.

Luckily, Unger decided to question this advice. “Something inside me kept telling me that it just didn’t sound right,” Unger told the New York Daily News. “I kept thinking to myself, ‘I don’t think I should have to lose my uterus just to get rid of a fibroid.’” And because she questioned the need for surgery, and took time to share her story, we have nominated Ms. Unger as our Woman Crush Wednesday honoree.

Too Many Hysterectomies Performed in this Country 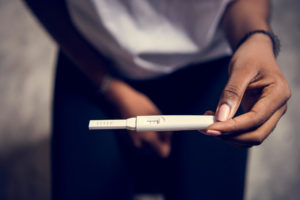 According to the National Uterine Fibroids Association, over 200,000 of the 600,000 hysterectomies performed in this country are on women with fibroids.

When a woman has a hysterectomy, her uterus (and, sometimes, her ovaries and fallopian tubes) are removed. As soon as the surgery is complete, women enter menopause and can never become pregnant or carry children.

Of course, for some women, this type of drastic surgery is necessary. But, according to a survey published in the journal Obstetrics and Gynecology, as many as 76% of non-cancer patients didn’t need to have the hysterectomies they were given. And, the rate of hysterectomies is twice as high in African-American women like Unger, who are also two to three times more likely to receive a fibroid diagnosis as compared to a white woman.

Thankfully, Unger decided to explore other solutions for her painful fibroid symptoms. Ultimately, she received a myomectomy—doctors removed her fibroid surgically, but preserved her uterus so she could still have children. Which she did: two daughters, Solange and Isabelle, now 20 and 17 years old, respectively.

And since she found a less-invasive alternative to hysterectomy, she shared her story so other women could do the same. Of course, myomectomy is still a surgery, but there are also effective, non-surgical treatment options women need to explore.

One important option? Uterine Fibroid Embolization (or UFE): it only requires local anesthetic. Your interventional radiologist will insert a catheter through a vein in your arm, accessing the blood vessels that supply oxygen to your fibroid tumors.  Your doctor then injects sand-like material into the catheter, blocking the vessels. And, without incoming oxygen, your fibroids shrink and die.

If that sounds good, consider this: studies have proved that UFE and hysterectomy provide most women with identical fibroid symptom relief. And UFE comes with fewer long-term side effects as compared to hysterectomy. And, while you should talk to your doctor before considering any procedure that could impact your fertility, many women go on to have healthy pregnancies following UFE treatment.